It’s been a while!

First off, I want to sincerely apologize for disappearing. I especially want to apologize for making people worry. I didn’t remember how negative my last post was, and going radio-silent after posting something like that was a horrible, horrible thing to do. I’m really sorry.

I’m fine; no unfortunate accidents or anything. It’s just… I’d miss a day, get freaked out, and tell myself, “That’s okay, I’ll apologize, but I’ll do it next week; I need to calm my nerves. In the meantime, I’ll do more work to make up for it!” But one week would become another, and all I’d manage to accomplish is feeling even more stupid and terrified.

I really, really want to apologize.

For more relevant news to this blog, I’m still working on Magicians of Delphine. I had a huge setback with writing, but I’ll talk about that next week.

I’ve also just recently (yesterday) set up a stream on Twitch if people want to drop by and see daily progress rather than weekly progress, or if they just want to speak to me. The username is aaazareal. I’ll be on at around 3PM PST for two hours, or 6-7PM PST for as long as I can. I’m using the place to force myself to work on my game more productively and more regularly, as well as getting more comfortable with interacting with people.

It’s totally okay to chew me out, by the way, both here or there. I totally deserve it. I’ll also reply to comments as I see them this entire week.

Once again, I’m really, really sorry for causing so much trouble. I hope people will forgive me. As for myself, I will do my utmost best to learn from my mistakes, as well as correct myself to become a better, more responsible person.

I’ve been asking to my brother to make some music for my game for the past year, but just a few days ago, I asked him again more seriously, and he’s decided to really stick with it this time! So I’m really happy to annouce I’m going to have someone making the music for Magicians of Delphine! Whoo!

Here are some samples of his music. He’s really great, isn’t he?! Hopefully he’ll finish a few tracks soon so I can show them off. RIGHT, RYAN?

I told myself I’d work hard and then the next week I take a break. HAHAHA… J-Just assume I’m going to do the opposite of whatever I plan. It always ends up that way anyway…

It’s no surprise that more bakeries are popping up in the capital. It’s the Bread Kingdom, after all. Unfortunately, the increased competition is causing the Panaderia to flounder. Having defaulted on payment once already, Ensaimada is granted until the end of the month to come up with rent or lose his beloved bakery.

As if that wasn’t big enough of a problem, Ensaimada can’t help himself when meets a homeless man that loves his food. Against his better judgement, he takes him in. Will he be able to save his shop with competition taking his customers and a new resident eating away at his profits?

The protagonist. A young baker trying to keep his bakery. He looks kind, but his personality doesn’t quite match his handsome face. Serious, hardworking, and temperamental, he makes it no secret that he prefers the company of bread over people.

Although he’s got a rough attitude, he’s a lot more softhearted than he’d like other people to know.

A homeless but well-dressed man Ensaimada takes into his home. He might seem calm, cool, and collected, but the truth is he’s just strange. Coco is incredibly lazy and– for a hobo–rather spoiled. Fortunately, he’s easily motivated with food, especially Ensaimada’s pastries.

His past is shrouded in mystery, but he’s apparently more than just some no-good leech…

Despite her homely looks, Senorita is a business magnate owning most of the land in Bread Kingdom, including Ensaimada’s bakery. She may look and act kind, but she didn’t come to own half of the kingdom by being soft.

Ensaimada’s supplier. A good man, but not all that smart. Monay treats his customers like his friends, which usually ends up being bad for his business. He bustles with energy and happiness, though strangely his boundless spirit often drains people instead of energizes them. 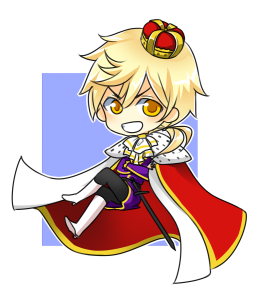 Bread Kingdom’s current ruler, King Torta, retreated from the public eye due to grave sickness 20 years ago. He has been in rule for almost 80 years, and the last time he was seen by the common people, he was a frail, withered old man on the troughs of death. Who is this kid then? Did the palace just declare a new king without letting the public know? And what does he have to do with Ensaimada and Coco!? 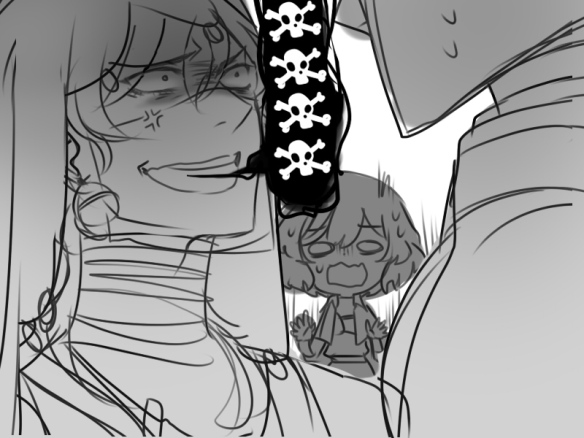 I’m having too much fun with the CGs.

I didn’t do a lot of drawing this week, ahaha. ^^; I think I should set some smaller goals. For this week, let’s try…

That’s one complete sprite, two rough CGs, and one chibi a day. Let’s try this! 🙂

Enjoyed my games? Want to donate? You can do it here!

Thank you for your support! ^^